Made in our Rose Gold Stand Mixer 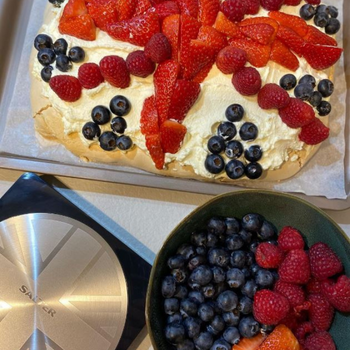 Step one: Preheat the oven to 150C/Fan 130F/Gas
Step two: Place a sheet of baking parchment paper on our Champagne Baking Tray
Step three: Put the egg whites into the Rose Gold Stand Mixer bowl and whisk until stiff but not dry. Gradually whisk in the sugar, a tablespoonful at a time, whisking for a few seconds between each addition. Finally, whisk in the vanilla extract and cornflour until well combined.
Step four: Dab a small amount of the meringue in the corners of our Champagne Baking Tray and position the parchment paper to secure it to the tray
Step five: Spoon the meringue into the middle of the tray and shape with the back of a serving spoon to create a large rectangular meringue nest, with soft peaks rising on all sides
Step six: Place in the centre of the oven and bake for 1 hour until very lightly coloured and crisp on the outside. Turn the oven off and leave the meringue to cool slowly for a further hour.
Step seven: Remove from the oven and leave to cool completely
Step eight: Whip the double cream in the Rose Gold Stand Mixer until soft peaks form and spoon into the centre of the meringue
Step nine: Create a British Flag with the strawberries, raspberries and blueberries. Decorate with sifted icing sugar to serve